From a reader, CSM Tim Green at the Bagram Airbase in Afghanistan:

"I have been in the Army over 27 years and have been here 15 months. My tour was a year and I extended it because I knew my first week here one year wouldn't be enough for all the work that needed to be done. Though many people here would rather be home, I have never met a troop of any service or any coalition partner who doesn't feel they are contributing something positive to the cause. I love the attitude of the troops over here.

"[We have] the pack of regular kids... that hang out at the front gate everyday. They sell their trinkets, junk, cigarettes, DVDs (bootleg), etc, to our guards and the Pakistani truck drivers bivouacking outside awaiting entrance onto the base... Last November I gave base ID cards to seven boys. The group is up to 18 boys ranging from six to about 14, and two girls, both about 12 maybe, one city slick and the other not too shy herself. It's a program to teach kids all the boy and girl scout virtues, allow them on the base to hang out and learn from Americans, pick up trash at the Friday bazaar in return for a share of the money we collect from the vendors to clean up afterwards, and recover something of a fun childhood the last few generations never knew...

"The luckiest boys in Afghanistan took tae kwon do with the Koreans and got their own uniforms, they have the biggest wardrobes of any 10 kids in Afghanistan. We pay for them to go to winter school (they take winters off since they can't heat the classrooms. We pay for three teachers and bought space heaters for three classrooms), they get to go to the dining facility every Friday before cleanup, and went on Thanksgiving and Christmas. [These kids also] act as translators for the guards, MP, and truck drivers as their English is coming alone fantastically... 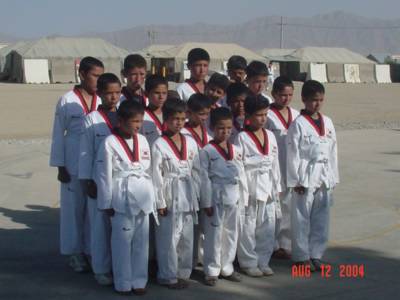 "We have a mission to help the country and many of us with the time and desire get personally involved. My goal was to take a few kids and develop them into clean, healthy, educated kids that have a great hope to be influential adults in the reconstruction of Afghanistan. I take them to the doctor when they're sick; I teach them proper nutrition when we go to the dining facility, and the danger of all the damn candy people give them; they have appropriate seasonal clothing, we teach them personal hygiene... One boy in particular shows great maturity for his age and I tell him my goal for him is to become the president of Afghanistan in 30 years. 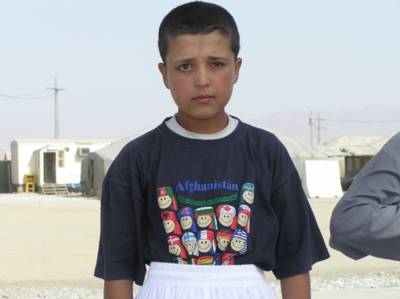 "For the girls I bought their mothers all new kitchen ware. I set them up with a female soldier who had girls day with them every Tuesday until she left herself. Now they have two new American girl friend. They go to the recreation facility and play games or watch movies, go eat lunch, come hang out with me for a while, go shopping at the PX. And they aren't dumb, either. I took them to the PX and let them select some things they wanted or needed: new scarves, hair brush, shampoo, hair bands, t-shirt, Vaseline. My bill came to $62.00!!!!!"

As Sergeant Major Green writes, these kids - like most of their peers throughout the country - haven't had a great childhood. While it's not part of their mission, don't you wish there were enough servicemen and women over there to extend friendship to every Afghan child?