Nowadays, you meet Republican voters in the strangest of quarters (hat tip: Al):

INTERVIEWER: A lot of people in rock and roll, it's very fashionable to despise George W. Bush. That's not a view you subscribe to, is it?

INTERVIEWER: Are you referring to Iraq or the broader war against al-Qaeda?

ALICE COOPER: I just think that that war's going to go on for a long time, whoever is the President. If it would have been Kerry, he would have been just as knee deep in it. I don't think Bush got us into that war. I think that started 9/11 and I think somebody had to take it from there.

INTERVIEWER: It doesn't worry you, the false connection that was made between 9/11 and Saddam Hussein, all that stuff that's been shown?

ALICE COOPER: No. It doesn't bother me because I honestly think it's all connected.

INTERVIEWER: The one thing we do know about 9/11 is that nobody involved in it actually came from Iraq. That's probably the one thing we absolutely know.

ALICE COOPER: Well, it's probably true, but I can't see them going, "Oh, gosh." The guys in Iraq going, "Gee, how horrible for America." I think there's a general feeling in that world that if America falls they'll be in a much better state, so we have to view those people in the same boat. I don't see much difference between the al-Qaeda and Iraq - not the people, I'm talking about the governments. The people, the poor people, are the victims.

INTERVIEWER: Saddam and Osama bin Laden actually hated each other.

ALICE COOPER: Hated each other a lot, I'll bet. They traded Rolls Royces. You don't think there was a cigar going around when that happened at 9/11. I'll bet you there was.

ALICE COOPER: That's the biggest shocker, I think. And that I'm a pretty good cook.

Alice Cooper, the godfather of shock rock, the pioneer of outrageous stage behavior, and the bane of moral crusaders throughout the 1970s. Who would have thought? Anyone wants to take a bet for Marilyn Manson, Republican for the Senate '26?

By the way, you have to be worried when a guy with too much mascara and a snake wrapped around his neck has a keener grasp of basic new millennium geopolitics than so many leading lights of the Democratic Party. 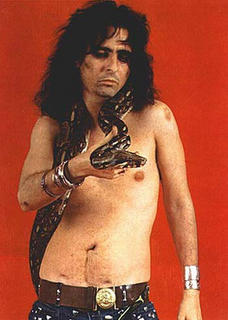