Nelson rolling on his column 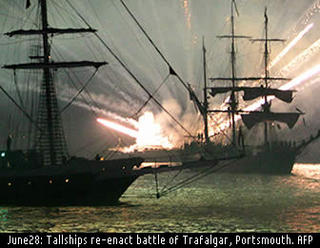 On the 200th anniversary of one of the greatest sea battles of all time, Trafalgar, two fleets re-enact the famous British victory over Napoleon's fleet. Well, actually not:

The tall ships later took up positions ready to mimic a sea battle that the Ministry of Defence pointedly said was "not a historical re-enactment" of the Battle of Trafalgar.

True, because the sailing ship replicas merely "exchanged" some fake cannon blasts for a show. And it certainly was not a historical re-enactment of a battle between British and French fleets. The non-re-enacting fleets were actually instead designated "red" and "blue" in order not to offend any countries (i.e. France) by reminding people that the battle of Trafalgar had winners (i.e. the Brits) and losers (i.e. the French) - and considering the state of our education system, people arguably need to be reminded that fact.

It all brings to mind the obligatory disclaimer: "All characters and situations are fictional and any resemblance to real-life characters and events is purely accidental."

And so it was yesterday with the two non-fleets non-re-enacting the non-battle.

I'm all for historical reconciliation and putting the past behind us, and so is everyone else these days, it seems, which is why Germany is now routinely invited to all the World War Two commemorations of, variously, German aggression and German defeats. But at least back in May this year no one went to all the trouble of staging the mock re-enactment of the taking of Berlin by the Red Army, even if it were to be a "blue" army "defending" an unnamed city from the storming "red" army (actually, swap that around - the storming "red" army is too close to historical truth). Perhaps some historical events are too sensitive, even for non-re-enactments.

Which begs the question, why even try for the Trafalgar spectacle if the whole exercise is meaningless from any point of view? But perhaps the more important question is, how can we expect the modern Europe to go to war with anyone today, if it doesn't even want to properly remember a war fought two centuries ago for the fear that to do so might offend the losing participant?

Because if war-making (or winning?) is such a sensitive matter even two hundred years after the fact, think just how much more sensitive it would be to fight against somebody who's actually still alive today, and can take a real offence, as opposed to a mere historical one on behalf of their ancestors.

Which is probably one reason why Europe is so reluctant to go to war against Islamofascism - since two hundred years from now we'll all be friends, this would make it awfully awkward for our great-great-great-grandchildren to remember the early 21st century's war on terror - so in the interest of harmonious relations in 2205 let's just skip the whole war thing now.

Who knows, maybe in 2204, the Madrid train station will see a non-re-enactment where "blue" commuters will be subjected to a few pyrotechnics set up by "red" terrorists (excuse the insensitive designation). But something tells me that on the other side of Atlantic, 9/11 will be remembered in a somewhat different way.

Be that as it may, no one should be too surprised that Europe, whose whole foreign policy is directed toward the removing war from international politics (or at least removing any chance of any Western power - and I use the word "power" in the loosest possible sense - participating in any war, and don't you mind the natives killing each other, even if they're occasionally European natives, like in the Balkans), has now succeeded in removing war from commemorations of war. Instead, all we got was an international pageant with plenty of sailors:

The armada of 167 ships from the Royal Navy and 35 other nations gathered in the Solent, off Portsmouth, for what was the largest peacetime international review in history.

Organisers said the event had the largest number of countries represented of any previous fleet review in the world.

The vessels, including ships from the United States, France, Spain, India, Japan, South Korea, Pakistan, Nigeria, Turkey and South Africa, lined up at Spithead with between 25,000 and 30,000 sailors on board.

So in order to commemorate Nelson's victory over Napoleonic fleet, the organizers chose to put together a Coalition of the Willing to Look Pretty in White, a sort of United Nations adrift, which also happens to be an apt metaphor for the actual (non-re-enactment) United Nations. The French, however, still didn't quite get the spirit of things:

There are two possible approaches if you are the French navy and the British invite you to celebrations marking the 200th anniversary of Trafalgar. You can either heave a great Gallic shrug, ignore the return slip at the bottom of the invitation and toss the thing straight into the bin with a parting "Pah!"

Or you can send a great big nuclear-powered aircraft carrier twice the size of anything the Royal Navy has - and which just happens to be named after the chap who said "Non" to the first British application to join the EEC - then park it right in front of HM the Queen.

The Marine Nationale decided on the latter course yesterday and a fine picture the Charles de Gaulle made at the fleet review. Only the American amphibious assault carrier Saipan rivalled the French ship in size.

It's nice for France to demonstrate to the world that it still has big ships ("we've got big ships and we're afraid to use them!"), but if it didn't quite work two hundred years ago, it's unlikely to work now.

The Queen, by the way, spent the day onboard the appropriately named HMS Endurance.

When asked why they had sent their finest warship, French Vice-Admiral Jacques Mazars replied: "We were invited. When you are invited to your cousin's wedding, you wear your best dress. That's what we have done."

Or rather, when you are invited to a commemoration of a marital row, do you come along bringing your biggest baseball bat? It certainly doesn't inspire martial confidence - does it? - when an admiral asked to explain a show of force uses fashion metaphors. But at least Vice-Admiral Mazars is someone Brits would describe as a "decent chap" - "there are no bad feelings," he commented about the celebrations. Some of his subordinates, however, weren't as generous:

"A lot of seamen on the Charles De Gaulle found it bizarre to celebrate with the English a battle that we have lost - it was provocative," said Stephane Lombardo, a pilot with the French Navy.

"If they have had a chance, half of the sailors would not have come," he added.

Which just goes to show that no matter how sensitive you are, you are still bound to offend some French.