In addition to the United States and the Iraqi forces, military personnel from 26 other countries are currently on the ground in Iraq, helping to bring peace and security, working on reconstruction projects, and engaging in humanitarian missions throughout the country. This is a tribute to those thousands of military men and women from around the world, some of them well-known, others less so, but all doing good work for the future of Iraq.

Albanian troops muster at the Mother Teresa Airport in Tirana before embarking for Iraq. More.

We are a supporter of U.S. efforts in the Middle East. This reflects the real transformation my country has gone through in the last few years. We went from a nation consumed by security and an economic crisis, by the collapse of state institutions, to a country that is now capable of contributing to global security and international initiatives. Albania has matured greatly. This came about with the assistance of America and several international institutions. So we take national pride in our ability to give back and foster democracy in other parts of the world. - Albania's socialist Prime Minister Fatos Nano 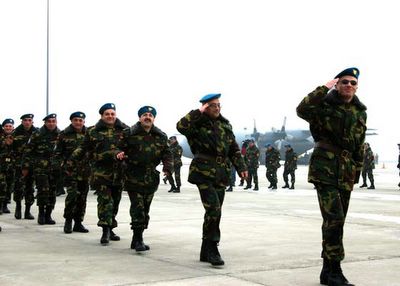 Armenian troops parade on the way to Iraq. More.

On patrol in Baghdad. More.

Australian military forces participated with just cause, in an action properly based in international law, which resulted in the liberation of an oppressed people. - Prime Minister John Howard

Azeri and American troops are protecting the vital Haditha Dam from terrorist attacks and sabotage. More. 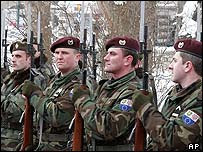 Defense Minister Nikola Radovanovic said [Bosnia] has a moral obligation to help in Iraq after all the international assistance it received during the conflict of the 1990s in the Balkans. 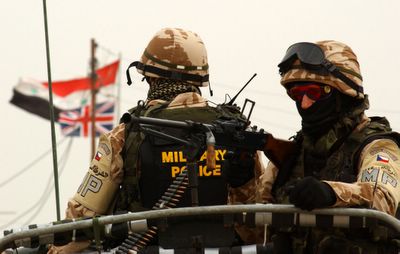 The fourth contingent from El Salvador embarks for Iraq in March 2005. More.

One of his friends was dead, 12 others lay wounded and the four soldiers still left standing were surrounded and out of ammunition. So Salvadoran Cpl. Samuel Toloza said a prayer, whipped out his knife and charged the Iraqi gunmen. In one of the only known instances of hand-to-hand combat in the Iraq conflict, Cpl. Toloza stabbed several attackers swarming around a comrade. The stunned assailants backed away momentarily, just as a relief column came to the unit's rescue.

Estonian troops patrolling Gazalia Village, a 15-kilometer section of road in the heart of Western Baghdad, known as an insurgent a hot spot. More.

Estonian Army Capt. Neeme Brus, a media relations officer with Multi-National Corps - Iraq, said Estonia knows the value of freedom and the need to fight terrorism here, before the fight ends up in their own back yard. "We have to prove that we are capable military partners for Americans and other nations in the coalition. We want to be considered as a serious nation when it comes to international security." 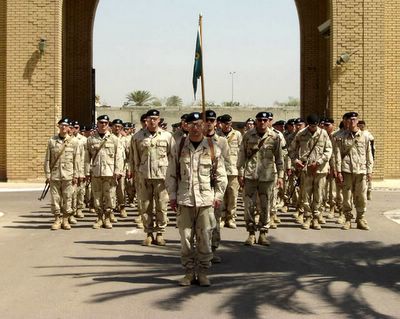 Company A, 13th Battalion prepares for their part of the parade to celebrate Georgian Independence Day in Baghdad. More. 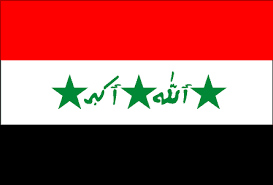 An Iraqi soldier of Special Iraqi Forces flashes the 'V' sign for victory as he returns to his base in Al-Saqr Camp, south of Baghdad. (AFP/Yuri Cortez) 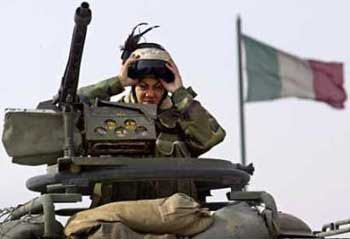 An Italian soldier adjusts her protective goggles before her convoy departed from their base on the outskirts of Nasiriya in this January 17 (Reuters). More.

"We are proud of you, not just because you are doing good for this country in helping it in economic and sociopolitical development, but because you are here to do something more important: to demonstrate that Italy is a nation capable of bringing the principles of rights and civilization to the world." - Prime Minister Silvio Berlusconi to Italian troops in Iraq

A young Iraqi boy waves to Japanese army soldiers as they drive past in the southern Iraqi city of Samawa, February 14, 2005 (Mohammed Ameen, Reuters). More. 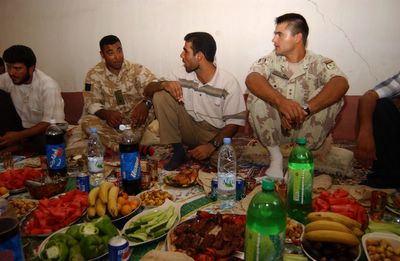 Coalition officers, including a Lithuanian, dining with a local agricultural committee while discussing reconstruction projects. More. 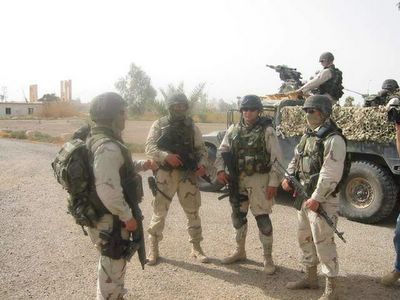 The last time Mongolian soldiers were in Iraq was in 1258. They destroyed Baghdad then. Now, the Mongolian military has 173 soldiers of the 150th Elite Peacekeeping Battalion in Hillah, Iraq. "White and red" on patrol in southern Iraq. More.

Saddam Hussein's Iraq was a totalitarian state. It was a country where people were murdered and tortured. So I'm looking at this through the eyes of the political prisoner in Baghdad, and from this point of view I'm very grateful to those who opened the gates of the prison and who stopped the killing and the torture... Poland is an ally of the United States of America. It was our duty to show that we are a reliable, loyal, and predictable ally. America needed our help, and we had to give it... We know what dictatorship is. And in the conflict between totalitarian regimes and democracy you must not hesitate to declare which side you are on. - Former Polish dissident and left-wing intellectual Adam Michnik.

A Romanian soldier sits atop a military armored vehicle at a police station in the southern Iraqi city of Nasiriya on January 17, 2005 (John Moore, Reuters). More. 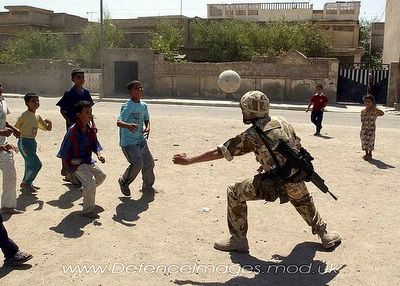 Soldier from the Queens Lancashire Regiment plays football with the local Iraqi children in the Al-Jumeat area of Basra City. More.

The spread of freedom is the best security for the free. It is our last line of defense and our first line of attack. And just as the terrorist seeks to divide humanity in hate, so we have to unify it around an idea. And that idea is liberty. - Prime Minister Tony Blair addressing US Congress

U.S. Army soldiers from the 1st Scout Platoon, Delta Company, 155th Brigade Combat Team form up along a wall as they prepare to clear a building known to house insurgents in an area of Al Iskandariyah, Iraq, on March 5, 2005.