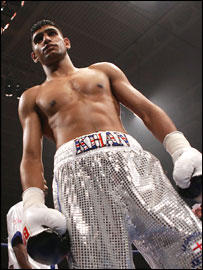 I'm not much into boxing, but this Pakistani-born British youngster sounds like a champ, in more ways that one:

Many 18-year-olds think that they can change the world; few attack the matter with such certainty as Amir Khan. Having disposed of David Bailey in 109 seconds on his professional debut at Bolton Arena, Khan moved on to the subject of fighting terrorism and how he believes that he can help. Everyone's favourite Bolton lad may be on the way to becoming Britain's favourite sportsman, but he does not want his influence to end at the ring steps.

"We need to get people together," Khan said. "I was upset by what happened (in London), all my friends were upset. We need people to help stop things like this happening. Hopefully, I am one of them. I will do anything I can."

Khan could easily hide from such issues and say that he is just a sportsman, but it is the way he embraces it head-on and believes that he can make a difference that makes him such an exhilarating personality - that and his phenomenal talent.

On Saturday night, Khan entered the ring to the strains of Land of Hope and Glory, his brother, Harry, carried a Union Jack with "London" emblazoned across it and some of his supporters carried banners combining the flags of Britain and Pakistan, with the words "No Terrorism". Even Khan's sponsored baseball cap was accessorised with a black ribbon.

Having knocked out his opponent, Khan dedicated his victory to the victims of the London attack. He is the anti-thesis of the four suicide bombers, a role model for the Muslim (and non-Muslim) youth, showing them the right alternative to the cult of death. Let's hope he can make a difference.