Well, I am now in a position to reveal for the first time to the general public the confidential United Nations (t)error alert system. And as you can see, as far as Zimbabwe is concerned, it's Code Yellow. So, early days yet and plenty more can go wrong on the international community end of things. 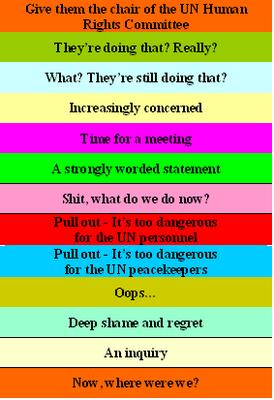 How about the Israeli/Palestinian conflict? Secretary General "views with alarm the renewed violence" - make that Code Light Blue.

Overall, it hasn't been too bad a year for the UN; certainly nothing like Code Red in Haiti and Code Blue in Rwanda some eleven years ago. And only a week ago, after all, we were remembering the tenth anniversary of Code Khaki in Srebrenica.