A Thousand Miles to Baghdad 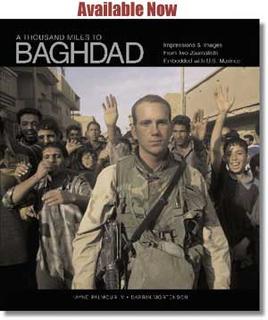 Over the past three years, some of the best reporting from Iraq did not appear in one of the big national dailies or newsmagazines, but in a small, Californian, Escondido-based "North County Times". Early in 2003, the newspaper sent over to Kuwait reporter Darrin Mortenson and photographer Hayne Palmour, who became embedded with Lima Company of the 3rd Battalion, 1st Marine Regiment, 1st Marine Division. It was a natural choice - the paper covers Camp Pendelton, the home of the I Marine Expeditionary Force.

"We didn't expect Darrin and Hayne to report 'the big picture'," write Terese Hineline, Assistant Managing Editor for News, and Cyndy Sullivan, Photo Editor at "North County Times". "We wanted our guys to tell stories. What did the Marines think? What did they see? What did they do?"

That they did. In the Iraq war reporting, which gave us so much of the bad and the ugly, the efforts of "North County Times" journalists stood out because they never thought it would be somehow unjournalistic to also give us the good, when the good was there to be reported. This never involved flag-waving or triumphalism - just telling it like it was. And so, Mortenson and Palmour first followed the Marines on their 1000-mile journey from the Kuwaiti border to Baghdad, and subsequently reported from the Marine area of operations around Fallujah (you will find many of their reports in some of the older editions of my "Good news from Iraq" series).

And now, comes this handsome coffee table book, which focuses on Lima Company's drive to Baghdad in March and April 2003, full of great photographs by Palmour and commentary from Mortenson. There's no politics or cheerleading, just an intimate look at a group of fighting men doing their best on the other side of the world.

It's beautiful, really, to watch soldiers on a tactical patrol. As the terrain opens up they instinctively spread out, and close in again when it narrows, always following the contours, always sticking close to something that shields them from full view. Hand signals freeze them in their tracks and, without discussion, they melt into the landscape like preying cats and wait silently for another signal before resuming the hunt,

observes Mortenson in one of his more lyrical moments. You won't find stuff like that at "The New York Times".

Here you can see some of the photos taken by Palmour in Iraq, and here you can buy the book from "North County Times".