"The Flight That Fought Back" 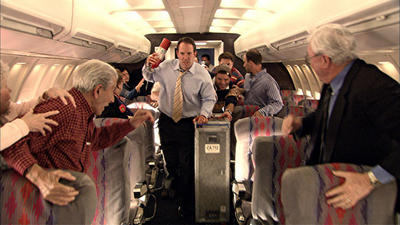 On September 11, at 9 PM (ET/PT), Discovery Channel will screen this documentary in the United States, with other countries to follow soon (please check you local TV guides for details). Thanks to the show's creators, I got a sneak preview and just finished watching it.

I cannot recommend it highly enough.

You simply cannot miss it. I never type in capitals to make a point, but you can take it that I am now. Extensively researched and drawing on some previously unpublished information, "The Flight That Fought Back" provides the most complete and comprehensive recreation of events onboard Flight 93. It's a stunning, immensely moving production.

The film, part re-enactment, part interview with family members, fleshes out the stories of those ordinary men and women who had found themselves in a situation that was far from ordinary, and who performed, too, in a way that was far from ordinary. Those onboard were a cross-section of America - young and old, all races and walks of life, everymen and everywomen - they were America. The sadness at so many lives interrupted and so much potential destroyed can only be mixed with the admiration for the spirit of the 33 passengers and 7 crew members, and the hope that springs from their sacrifice.

For me, the most poignant moment came with the recollection by Tom Burnett's wife, Deena, that Tom had been reading about Gettysburg, and had remarked to her upon the courage of soldiers who knew they were going to die, yet they marched forward against the enemy. Knowing they will never see their families again, the soldiers wrote short notes to their loved ones, and pinned them to the trees.

Those onboard Flight 93 didn't write notes; they spoke on cell phones and left messages on answering machines, but then they, too, became citizen soldiers and laid down their lives for the greater good, saving countless others. This is the reason why the Islamofascists cannot win - because ordinary people, our brothers, sisters, parents, children, friends - can and will rise up to the challenge when the circumstances call.

On September 24, 2002 the United States Congress passed the Flight 93 National Memorial Act. The Act created a new national park unit to commemorate the sacrifice of crew members and passengers. The memorial will reside on the site in Shanksville, Pa., where Flight 93 crashed on September 11, 2001.

In conjunction, Discovery Channel will do the following:

Discovery Communications will air two specially created public service announcements that encourage viewers to donate to the Flight 93 National Memorial fund. The PSAs, one of which features Sarah Wainio, the sister of Honor Elizabeth Wainio who was a Discovery Communications employee aboard Flight 93, will air during the premiere of THE FLIGHT THAT FOUGHT BACK and across Discovery's U.S. networks on September 11.

DVDs of THE FLIGHT THAT FOUGHT BACK will be available online at www.discoverystore.com. Discovery Communications will contribute all revenue generated from DVD sales to the Flight 93 National Memorial fund. In addition, from September 11 to September 17, a percentage of all retail revenue from any Discovery product sale will be contributed to the memorial fund.

Visit the site, and consider donating to the cause.