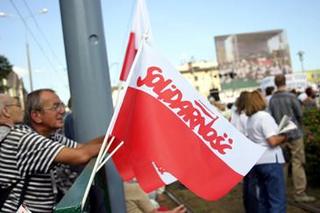 Twenty five years ago a seed was planted in a little crack on the communist monolith. That day, August 31, 1980, no one expected that the seed would grow to be a huge tree whose roots would nine years later split and shatter the edifice.

As President of the European Commission José Manuel Barroso said,

I do not think this is the last anniversary of Solidarność which will be celebrated. I suspect that in 100, 200 years time what happened in Poland in 1980 will still be recognised as a very significant event in the history of Europe after the Second World War. It is one of those moments which will continue to grow in importance as it is viewed through the telescope of history.

Yesterday, world dignitaries and the locals gathered at Gdansk’s appropriately named Solidarity Square to remember and celebrate underneath a giant banner which said "Solidarity opened the gates to freedom." It was not, by any means, a high level event comparable to the Moscow celebrations of the end of World War Two a few months back – the American delegation was led by the former Secretary of State James Baker and Daniel Fried, assistant secretary of state for European affairs - but it was no less poignant for that.

Perhaps not surprisingly, considering how touchy the topic of the fall from the imperial grace still is in Moscow, and considering the strained relations between the two countries, Russia has stayed out the celebrations. But the leaders of Ukraine and Georgia did turn up. "For the Ukrainian people the idea of Solidarity was symbolic," Ukrainian President Viktor Yushchenko said. "For millions it was a banner of independence." "Solidarity was the best thing which happened in the 20th century," added Georgian President Mikhail Saakashvili. Both gentlemen were of course the beneficiaries of the latest round of Solidarity-inspired popular revolutions in the post-communist world.

Lech Walesa, the hero and the symbol of the celebrations himself, was sounding a more cautionary note about the future, warning about dangers of a rush confrontation over the next possible domino to fall in eastern Europe's ongoing democratic revolution - Belarus.

“Russia is at a crossroads... Will Russia in future be a threat or a friend? That is the question. Russia is needed by every country — it has huge resources, but of course it is needed not as a hegemonic system but as a developed, democratic country...

“Russia’s problems are in proportion to its size… As long as Russia is burdened by vast economic and social dilemmas, it will be liable to seek out scapegoats elsewhere. We have to find a way of talking with the Russians, sitting together and sorting out problems, freely, and as equals.”

Walesa also made a good point that if the West wants to see free and democratic Belarus, it should be prepared to put its money where it mouth is, when Russia stops propping up Belarusian economy. “We have to offer these societies a new Marshall Plan,” Walesa said. This is unfortunately unlikely to happen, with the European Union preoccupied with its own identity crisis, and the United States busy with the democratic project in the Middle East.

But the present and the future did not otherwise intrude too much on the celebrations of the past. "We hold our heads high, despite the price we have paid, because freedom is priceless," Lech Walesa told the special sitting of the Polish Parliament.

And there indeed have been costs and pain. Poland, while better off than many other post-communist countries, is still battling social and economic dislocation, biggest unemployment in Europe, and pervasive feeling of unhappiness and disappointment. Not many would want to go back to the old days, but the bright future looks very distant, and the journey there seems very hard.

Walesa himself is resigning from “Solidarity” next week, with mission accomplished. "I was a member of a freedom movement, not just a trade union... I feel that Poland is safe now. I am confident of its place in history and in Europe," he says. A national icon during the 1980s, a disappointing president in the early 1990s, Walesa is now slowly growing into the elder statesman role (not to mention the latest comic book hero). History will be kind to him.

"Polish members of the European Parliament yesterday proposed officially marking 31 August, the day the anti-communist Solidarity movement was born 25 years ago, as an annual 'European Day of Solidarity and Freedom'."